Round 7 of the Kinesis UK London and South East Cyclo Cross League took place later that day.  The event was held in the leafy environs of Preston Park, Brighton, promoted by Preston Park Youth CC and incorporated Round 2 of the Sussex League.

A trio of Lewes Wanderers were on the grid for the race for men in their forties which began at 11:30.  Dan Street started in 23rd, stayed out of trouble and pretty much maintained station to the flag to finish in exactly the same place come the end of seven laps. 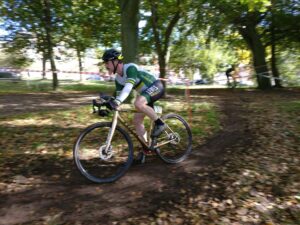 Darren Haynes and Paget Cohen began more or less alongside one another mid-pack, but while Darren gained half-a-dozen places on the first lap, became engaged in a mid-race tussle and just missed out on the sprint for 39th, Paget had a pre-Halloween nightmare.  Three slow speed first lap offs on the slippery surface were followed by two more at the start of the second circuit. The latter of which saw him clip a wall, cut his hand badly and puncture. Having run with his bike almost an entire lap back to the pits he exchanged wheels and rejoined the fray, but finished last of the 71 finishers 2 laps down.

In the following race exclusively for women Lewes Wanderer Kathryn ‘Mugs’ Gohl, racing for URDT, came 25th out of 44 overall, but 11th out of the 16 women in her age group, 1 lap down on the winner.

After the women came the race for men over 50 in which Stephen Burgess and Dom Lowden were flying Lewes colours.  Dom started just ahead on the grid, but Stephen coped with the technical nature of the course better to edge ahead by the end of the first lap.  Stephen finished 5th of the 11 men aged over 60, with Dom in 7th.

2017 National Hill Climb Champion while racing for Lewes Wanderers Joscelin Lowden was back trying to reclaim her crown that same morning.  Now representing The Independent Pedaler on the climb of Haytor Vale out of Bovey Tracey Devon she finished a fine second place from 46 finishers in 14 minutes 29.3 seconds just 11.5 seconds behind the winner.