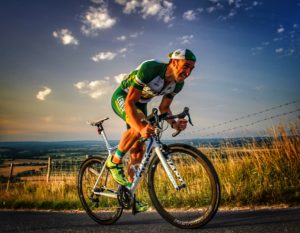 With Lewes Wanderers series of evening 10 mile-trials over it was time to switch attention from the barely perceptible gradients of the A22 to the hard to miss precipitous ramps of the South Downs.  More precisely the road from Firle village to the car park at Firle Bostal and the club’s annual hill climb up such. Fourteen plucky riders made their way to sign on at the summit on the evening of Monday 6th August then rolled down again in preparation to race back up against the stopwatch.

Winner for the first time and the only competitor to beat five minutes was Aidan McConville in a time of 4 minutes 53 point 5 seconds.  Third placed in 2017 Peter Baker was a few seconds slower than the year before, but took runners-up spot in 5:04.98 while Richard Burchett 5:09.08 just beat Rob Pelham 5:16.0 and Paul Fletcher 5:18.8 to third.

Peter Baker was back plugging up hills on the evening of Thursday 9th August as one of fourteen to compete in Eastbourne Rovers Cycling Club’s hilly 7.2 mile test from just east of Birling Gap up to Beachy Head, west along the main road and back through East Dean.  He was 7th in a time of 19 minutes and 17 seconds while former-Wanderer Joscelin Lowden (Storey Racing) came 4th in a new ladies course record of 18:28.

Sunday 12th August saw the East Sussex Cycling Association 100 mile time-trial, incorporating the Veteran Time Trials Association Surrey/Sussex 100 mile Championships.  The prospect of racing such a distance in torrential rain no doubt contributed to sixteen of the fifty entrants not-starting, but it turned out the precipitation amounted to no more than a few spots so the riders had merely the demands of the event to contend with.

All seven Lewes Wanderers to have pre-entered were present at the start line, amongst them several attempting the challenge for the first time.  Gavin Richards took to the task like a duck to water as he proved fastest Wanderer as he finished 16th in 4 hours 18 minutes and 47 seconds. Brett Davis was three places behind in 4:28:15, while three places behind him and second fastest female was his wife Lisa in a superb 4:33:49.