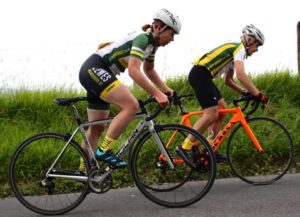 Lewes Wanderers’ annual Hill Climb Championship took place up the brutal slopes of Firle Beacon on the dry, but overcast evening of Monday 2nd August.  Winner, as he has been so many times recently on the flat, was Joe Benians who reached the summit in 4 minutes and 32 seconds.

It was a close fought thing however as runner-up Tom Moss was only 17 seconds behind, with Paul Fletcher taking 3rd in 5:13.  Two seconds behind 5th placed Peter Baker the fastest female was Kate Parrish in 5:36, 50 seconds ahead of 9th placed Kate Thomas.  Just behind her were Ed Tuckley (5:39) and Roger Hutchings (5:43).  The margins were narrow throughout the field as 13th placed John Mankelow (7:31) only just got the better of Dave Beale (7:34).

The 31 athletes who signed up for the East Sussex Cycling Association 100-mile Championship on Sunday 8th August no relished neither the distance they would have to cover nor the 6am off.  As it was the early start, designed to avoid traffic build-up on the mainly A22 based course spared the 23 starters the worst of the weather as a bright. Albeit showery morning gave way to a torrential downpour for the latter stages.

Somewhere you might reasonably expect to find a lot of water is the Lake District and this was the arena for the Road Time Trials Council National (North DC) 25-mile Championship on a no-doubt stunning course alongside Bassenthwaite Lake between Keswick and Cockermouth the same morning.  Not taking any time to take in the scenery were Sally Turner and Brett Davis, both racing for trainSharp.  Sally placed 7th of 38 females and fastest over-40 in 54:56, while Brett was equal 43rd from 95 in 52:38.