The thirteenth and final round of Lewes Wanderers series of 10-mile time-trials took place on the evening of Monday 26th July and incorporated the “2-up 10” where raiders could compete as pairs, preferably riding together, with the time being taken on the second rider to pass the finish.

Seven duos formed at some point prior to taking the start, the victors being the all-Lewes pairing of Joe Benians and Kate Parrish who sped round in 22 minutes and 44 seconds, 23 seconds faster than Lewes clubmate Tom Moss and his riding-partner Razemek Jersz.

Lewes pair Clint Allen and Gav Richards were fourth in 25 minutes dead, 64 seconds ahead of father and daughter John Mankelow and Kate Thomas.  Dave Beale and Andrew Razzell were 6th in 27:19 ahead of Paul Hanratty (LWCC) and guest partner Jamie Goldstein (28:09).

Peter was then down at Preston Park for Week 16 of the Sussex Cycle Racing League Wednesday Track League on the 28th where he crossed the line in 8th position at the end of the 10-lap Scratch Race.

On Thursday 29th Kate Parrish was 7th overall from 18 racers and fastest female in a hilly 12.31-mile time-trial across the Ashdown Forest hosted by Southborough & District Wheelers thanks to her time of 37:36.

On the somewhat flatter A24 in West Sussex the same evening Sally Turner (trainSharp) was 5th overall and also fastest female over the 10-mile course in a blistering 21:33.  There was double cause for celebrations in the household as her partner Allan Smith was 17th but, more importantly, smashed his personal best as he recorded 24:47. 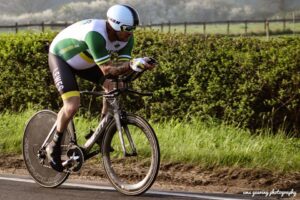 If you’re intending to be riding a bike for half a day then a relative absence of hills may well seem to be at least a minor consolation.  That said the entrants in the Road Time Trials Council National 12-hour Championship, incorporating the Veteran Time Trials Association Championship and promoted by Breckland CC and East DC may well have appreciated the opportunity to get out of the saddle as they ploughed up and down the A11 south-east of Norwich from the early hours of Sunday 1st August.

Amongst the fifty-eight men to start was Lewes Wanderer Gavin Richards.  Aided by the roadside support of clubmate Clint Allen he covered a remarkable 270.50 miles at an average of 22.54mph to finish equal 25th from the 50 to stay the duration.