Due to Round 4 of the HSBC UK National Cyclo Cross Trophy being held at Cyclopark Gravesend on Sunday 26th November Round 10 of the Kinesis UK London League was switched to Saturday 25th in part to allow the top riders from the south east to compete in the more prestigious event.  As such entries were down by some 25-30% compared to the norm, but the racing was no less competitive for that.  That wasn't the only change the riders had to cope with compared to previous years as due to approximately a third of the 40 acre Penshurst site being sold off to another cycling concern promoters Westerham CC had to devise a new course.  The main difference the competitors could hardly fail to notice was the loss of the relatively flat gravel start/finish straight.  Instead for 2017 races began at the foot of a long and steep grass and earth bank which only those at the front with a clear view of the course ahead could even attempt to ride, the remainder of the field being forced to assay the opening few hundred yards of the course on foot before being able to saddle up and clip in.  Overnight frost in this part of west Kent had thawed and this plus the morning's races for the under 40s meant that by the time any Lewes Wanderers took to the track at around noon any exposed sections of earth track were now a watery mud.  Thus while the mile long course didn't have the hurdles or dense woodland of other circuits it was still a technical challenge as the first half of the lap became a sequence of downhill plunges where the riders had to simultaneously exert firm yet gentle control of the steering and brakes through the ruts in order to stay on the course followed by an exercise in laying down controlled power in conditions of reduced traction as they slogged their way back up the slippery slopes to the top of the course to start the next of the 6 laps.

Two Lewes riders were willing to subject themselves to such a test in the race for men in their forties; Darren Haynes lining up 47th on the grid of 64, with Paget Cohen one row behind in 53rd.  As at many rounds this season Darren dealt with the early traffic far more effectively and at the end of the first lap was up to 38th place, 40 seconds and 10 places ahead of his team mate.  At the end of lap two Darren had gained a further brace of places and put a further 12 seconds into his club-mate, although Paget was now up to 43rd.  Just as in previous rounds, however, as the race strung out and some riders tired Paget was able to take advantage.  On the third circuit, when they were both lapped by the leader, Paget pulled back 8 seconds on his team-mate and by the time they heard the bell he was only 33 seconds back.  Despite Darren suffering a momentarily dropped chain plus a slight fall and Paget putting in his best lap of the race the former saw the chequered flag in 30th place, his best result of the season, with the latter just 13 seconds and 3 places behind for the highest place finish in his fledgling cyclo-cross career.  Next on the track were the 37 men in the event for over 50s with Lewes Wanderer Stephen Burgess starting in 16th and finishing in 17th. 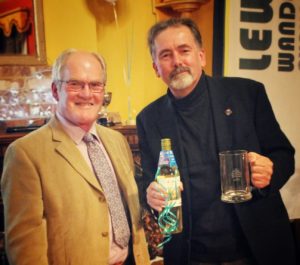 That evening saw the annual Lewes Wanderers Awards Dinner organised by new Social Secretary Ems Gearing and held for the first time in several years at The Roebuck Inn, Laughton.  As well as handing out trophies, medals and certificates to the 32 riders to have claimed a podium position in an event or been part of a club record in the past 12 months it was also an opportunity to recognise the massive contribution to the club that former Chairman Chris Martin made in his eight plus years at the helm.  On top of his official duties Chris also produced a very popular club magazine, maintained the club's website, was heavily involved in the annual Crits race series and hosted the awards do, as well as finding some time to ride and race his bikes.  Chris stepped down from his role in August in order to devote more time to his job and other hobbies and was presented with an engraved glass tankard and a bottle of wine by Club President Richard Meed to thank him for his work; he remains a highly valued member of the Club.  As well as picking up 12 trophies for his racing the outgoing Time Trial Secretary Tom Glandfield was given The Merit Cup for 'outstanding contribution to the club' in recognition of his years of service in the role as he too is due to stand down at January's Annual General Meeting.  Also honoured on the night by the committee was Micky Turner who was presented with the Zonca Bradshaw Trophy for 'Effort and Perseverance' thanks mainly to his riding of the 892 miles of London-Edinburgh-London in a phenomenal 82 hours and 22 minutes back in the summer.

The onset of autumn traditionally sees not just a change in the weather, but a…

Daniel Gould, the photographer from Cycling Weekly that worked with us on the Ride with…