Round 8 of Lewes Wanderers’ summer series of 10-mile time-trials took place on the evening of Monday 24th June.  Fastest rider from the home club, behind two guests, was Richard Burchett who reduced his personal best by six seconds to 22 minutes and 33 seconds.  He was followed closely by Duncan Fuller (22:43), Paul Fletcher (23:02), Peter Baker (23:07) and Dan Street (23:17).

Anna and her dad Nick Dwyer were back in action on Wednesday night when both competed over the rarely run distance of 15 miles in an a3crg event along the A3 near Haslemere in Hampshire.  It was worth the trip as both recorded new club records. Nick’s time of 31 minutes and 14 seconds placed him 6th out of 66 overall, while Anna’s mark of 37:55 left her 49th and 10th of the 12 women to compete.

The same evening Peter Baker was also competing in unusual event as he was one of nine participating in the Hastings St Leonards CC 18-miler from Ore to Rye and back along the A259.  His time of 45 minutes and 33 minutes granting him 3rd place.

On Thursday 27th June Lewes hosted their 17.68-mile Circuit of Earwig time-trial.  The event almost didn’t take place as first they had to resolve a potential clash with a Surrey League road-race due to make use of some of the same roads and then a tree fell down blocking the A26 just a few hours before the first rider was due off, but thankfully that was cleared in time. 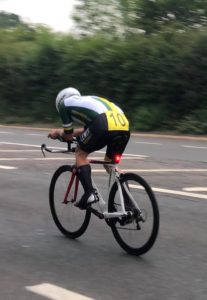 Setting his second club record in two days was Nick Dwyer who sped round in just 37 minutes and 55 seconds to take the spoils.  Third placed Martin Baddeley (40:40) took 2 seconds shy of 3 minutes off his previous best round the course, while 5th placed Paul Fletcher (41:50) improved by 56 seconds to beat Richard Burchett to 5th by 1 second, but he was still 4 seconds behind Gavin Richards in 4th.

Not far away that evening Michael Valks was 8th of 15 starters in an Eastbourne Rovers CC run 5-mile time-trial with his time of 1 hour 3 minutes and 43 seconds, while Paul Hanratty recorded 1:14:42 to finish 14th.

Nick Dwyer headed up to near Hoddesdon, Hertfordshire on the afternoon of Saturday 29th of June as one of 73 riders in the Whitewebbs 10-mile time-trial.  Despite having to stop to put his chain back on he still recorded a phenomenally quick time of 20:25.

As Nick went north Peter Baker went west on Sunday as he recorded a time of 57 minutes and 16 seconds to finish 44th out of 78 racers in a Hampshire RC 25-mile event.

Evening 10s Round 13 and racing round-up

In what is likely to be her last competitive ride for the club, and certainly…