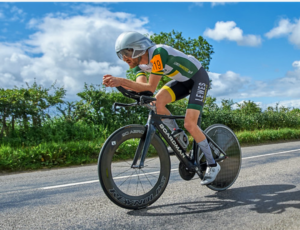 Long-term roadworks on the A22 enforced the adoption of a newly devised course for Round 10 of Lewes Wanderers’ series of 10-mile time-trials on the evening of Monday 8th July.  Rather than the out and back from East Hoathly to the Boship Roundabout that has been used for many years the new circuit was roughly triangular in nature. From just south of Halland, riders would go down The Broyle to the Kennel Corner mini-roundabout; turn left and race through Laughton until the A22 and then left again back to just before East Hoathly.

Perhaps it was the lure of the new, but an impressive turn-out of 26 competitors signed on to pit themselves against the stopwatch.  Fastest from the host club, and thus setting a new club course record, was 2nd placed Jamie Lowden who completed 10 miles in 22 minutes and 16 seconds, just 10 seconds ahead of Brett Davis in 3rd.

The following evening Mark Frost was the only Wanderer among 30 participating in a Brighton Excelsior 10-mile event near Steyning, but his time of 21 minutes and 51 seconds placed him a very handy 5th place.

On the evening of Thursday 11th Ed Tuckley took part in an Eastbourne Rovers CC event involving two 7.2mile loops of their rather hilly loop past Birling Gap and Beachy Head.  His time of 39 minutes and 47 seconds placed him in 5th of the 9 competitors.

On Sunday 14th July Dom Lowden took part in a League of Veteran Racing Cyclists event - the San Fairy Ann CC promoted Round 9 of the Le Col/Arcadian Series.  The 26 riders in the over-60s category raced over 8 hilly laps of a roughly 4-mile loop over the Ashdown Forest. A pair of riders got away early, but Dom stuck with the chasing group of seven and crossed the line in 7th place.