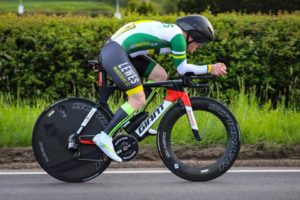 Three Lewes Wanderers from past and present turned up for Round 2 of Eastbourne Rovers Cycling Club’s Evening 10 series on the warm, but blowy evening of Thursday 26th April.  Rob Rollings followed up his fine performance along the same A22 based course from the weekend before with another sub 22-minute ride. His time of 21 minutes and 47 seconds placed him 4th of the 21 competitors.  Lewes Wanderers’ Club Chairman Dom Lowden came 12th with his time of 24:04, while his daughter and former-Wanderer (now Storey Racing) Joscelin Lowden was quickest of the two female entrants and in 10th overall posting a time one second under 23 minutes.

Lewes Wanderers’ Nick Dwyer powered to victory in the Veteran Time Trials Association Surrey/Sussex 10 mile time-trial on the cool and cloudy morning of Sunday 28th April.  Along the all-too-familiar A22 course his time of 21 minutes and 28 seconds gave him the spoils over the runner-up by 8 clear seconds. Clubmate Peter Baker took a solid 10th place of the 31 participants with his time of 24:13.