While most cyclists were doing their best to dodge the showers over the course of the weekend of 30th September and 1st October Lewes Wanderers' Peter Baker was having something of an Indian summer.  On Saturday afternoon along the A3 near Guildford he set his second fastest time over 10 miles when finishing joint 53rd of 100 starters in a Utag Rt run time trial in a time of 21 minutes and 46 seconds.  Just the next morning in the Veteran Time Trials Association London and Home Counties 25 mile event down the A404 between High Wycombe and Twyford he repeated the feat with a time of 56 minutes and 59 seconds for 10th place of the 36 starters.  All this was achieved in conditions that led to 50 non-starters in the former event and 28 not showing up the following day. 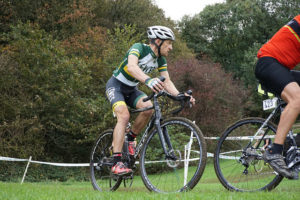 Some would argue that the autumnal conditions of that Sunday were ideal for cyclo-cross racing.  That would be a matter of opinion, but seven Lewes Wanderers pitted themselves against what the Preston Park Youth CC course designer had devised for Round 4 of the Kinesis London Cross League, incorporating Round 2 of the Sussex League around Happy Valley Park in Woodingdean.  In the race for those aged 40 to 49 Rob Pelham finished an excellent 31st of the 98 riders, while Paget Cohen was 61st, 2 places and a few seconds ahead of Darren Haynes. Jon Collett was on the same lap in 88th position.  Rain arrived for the later races where Stephen Burgess came 32nd of 49 in the event for over 50s and Chris Hough stayed the course on his return to racing after a broken ankle.  Bad luck of that sort is running in that family as his son Patrick came down and fractured his lower leg while vying for the leading places in the race for under 40s.

Over in Bath Callum Middleton was one of 61 to tackle Claverton Hill, a 900 metre stretch of tarmac rising 81 metres, in a VC Walcot promoted hill climb.  His time of 2 minutes 40.2 seconds placed him in 31st position.

The morning of Saturday 7th October was damp for the first of Brighton Mitre’s pair of annual hill climbs, that of Steyning Bostal.  Two Lewes Wanderers both called Peter were involved with Peter Kilby recording time of 5 minutes 40.6 seconds for 15th of 19 finishers.  Peter Barling’s time of 5:46.6 placed him 18th.  The tables were turned after lunch for the second ascent, this time up the slightly less steep, but longer Mill Hill out of Shoreham as Peter Barling’s time of 9 minutes 27.3 seconds left him in 11th place of the 15 competitors, with Peter Kilby (10:11.3) in 14th.