The day after Lewes Wanderers' annual Awards Dinner on 25th November five prize-winners from that night were invited to Dial Post Village Hall for the Annual Sussex Cyclists Association Awards Do.  On top of recognising Gina McGeever's individual success in winning the 30 Mile Championship on 30th July and Peter Baker, Tom Glandfield and John Mankelow taking the 100 Mile Team Championship from the ESCA 100 on 13th August, which substituted for the cancelled SCA event, the star of the show as far as LWCC were concerned was Lisa Davis who won the West Sussex RC Plate for best Long Distance All-Rounder for 2017.  This prestigious trophy is based upon the fastest average speed over 10, 25 and 50 miles in certain qualifying events ridden during the season.  On 2nd July Lisa won the SCA 50 Mile Championship in a new record time of 2 hours 11 minutes and 11 seconds.  This result coupled with her victory in the 26th August SCA Sporting 10 in a new course record of 26 minutes and 11 seconds on, backed up with her triumph in the SCA Sporting 25 in 1:04:55 on Monday 28th August were enough to give her an average of 22.964mph, nearly a whole mph ahead of her nearest challenger, but just slower than her club-mate Tamar Vanderhaas who carried off the very same silverware in 2016. 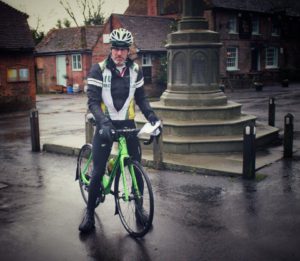 Sunday 10th December was down in the calendar for Round 1 of Lewes Wanderers' annual three-part winter cycling competition named after former club stalwart Reg Porter.  It was no doubt much to the disappointment of this year's organiser Lisa Davis that the morning was one of sporadic heavy rain and winds gusting to 50mph such that only five intrepid cyclists ventured out to subject themselves to the challenge she had put so much effort into devising.  The odyssey known in the club as a 'Tourist Trail' that she had concocted involved a basic route to follow of 27 miles and 2,800 feet of climbing leaving Boots in Uckfield at 9 o'clock to arrive at Petals for Plants garden centre near Broad Oak by 11 o'clock sharp.  That in itself would be easy for most of the regular riders of the Sunday club runs whatever the conditions, but along the way the competitors were required to deposit a postcard into a box by a certain time and answer some questions based upon the places they were passing.  They could gain bonus points for being photographed by the event photographer Ems Gearing outside the Star in Waldron and also for making a purchase from a local business along the way and providing a receipt as proof of purchase at the finish.  As if all that and the weather weren't enough to tax mind and body the entrants were given the option of collecting further bonus points and mystery prizes for taking diversions off the main route at the obvious expense of time and energy.  Winner on the day and the only combatant to arrive in time for elevenses was regular club run leader Ian McGuckin who also managed to collect two mystery prizes (bike locks) along the way.  Rob Pelham also gathered two locks, but was outside the time limit so finished runner-up.  Rob Rollings gambled on scooping one of the mystery prizes, but failed to find it when he got there so came fifth and last behind James Geldart and Micky Turner.  Round Two, the 'Free-Wheeling', will be held on Sunday on 21st January near Horam.

Conditions were scarcely any better on the outskirts of Croydon that lunchtime for Round 11 of the Kinesis UK London and South East Cyclo Cross League.  Race promoting club Sutton CC had marked out a long and twisting circuit through the woods at Frylands Wood Scout Camp in South Addington that would have proved a stern workout in the dry, but in parts had been rendered a quagmire by the rain and required the riders to dismount and shoulder their bikes where the combination of wet mud and gradient proved too much to ride.  Darren Haynes was the first of two Lewes Wanderers to take to the start line when he lined up amid 53 others in the race for men in their forties just before midday.  Starting 35th Darren managed to gain a couple of places, but by mid-race he found the accumulation of muck had rendered his brakes more-or-less useless and he had to resort to unclipping one or other foot to slow himself down via contact with the ground.  In the circumstances he was quite relieved to be lapped by the leader just before he completed his third lap and happy to finish a lap down in 33rd place.  Light snow was falling by the time Dom Lowden saddled up alongside 37 other men in the race for over 50s around a course already mightily cut up by the previous races.  Calling on all of his bike handling skills allied to a fair bit of cross-country running he made up 8 places from his 26th position on the grid and crossed the line in a fine 18th place and on the same lap as the victor.

Circuit of Danehill and TT round-up