On Sunday 15th October Lewes Wanderers' Peter Baker was one of 288 entrants, of whom 208 were male, in the Road Time Trials Council National Closed Circuit Championship.  This event comprised five laps of the 2.356 mile long Thruxton motor racing circuit in Hampshire for a total distance of 11.8 miles.  Being a former airfield the course is relatively flat and should have a well-maintained surface, but the biggest bonus for the competitors would be that they shouldn't have to worry about the proximity of any motorised traffic.  Peter's time of 26 minutes and 49 seconds at over 26mph placed him 88th overall, 82nd amongst the men and 5th in the 55-59 age group.

On a beautiful sunny afternoon Darren Haynes competed in Round 2 of the East Kent Cyclo Cross League at Newington Community College, Ramsgate and promoted by VC Deal.  With only 30 other men in the 40-50 years age group Darren had a good chance of a high finish, but on the opening lap he got too close to the tape marking the perimeter of the course and unfortunately it became entangled with his rear brake mechanism pulling many of the supporting stakes out of the ground with it.  By the time Darren had extricated his bike from this predicament he was at the rear of the bunch, but he fought back to 17th position, 1 lap behind the victor.

The worst that Storm Brian could produce may well have passed over by the morning of Sunday 22nd October, but it's after effects were still felt by those Lewes Wanderers attempting to race.  Down near Steyning a pair of Lewes riders competed in the Brighton Mitre CC 25 mile time-trial with Callum Middleton coping with the wet roads and gusting westerly wind rather better than Rich Streeter as Callum sped to 7th place and a new personal best of 57 minutes and 26 seconds while Rich was over 5 minutes outside his PB with his time of 1:15:10.

Up at the South of England Showground, Ardingly, the sun was out for Round 6 of the Kinesis UK London Cyclo-Cross League, incorporating Round 3 of the Sussex League, but not sufficiently to dry the predominantly grass course devised by the promoting Crawley Wheelers club.  As such said circuit increasingly turned from the green of grass to the brown of mud, not helped by 94 riders in the race for 40-something men churning it up with every pedal revolution.  Of the five Lewes riders in that event Rob Pelham suffered one fall and a slipped chain to cross the line in 42nd place, one lap down on the leader. 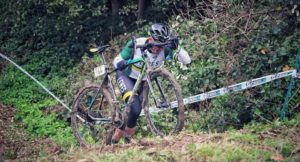 Paget Cohen was on the same lap, albeit 25 places and 5 minutes back having endured three spills and a dropped chain from the slippery surface.  They each fared well in comparison to their clubmates as Richard Frost and Darren Haynes only completed three and two laps respectively before the accumulation of cloying mud to their derailleurs led to race-ending breakages.  Jon Collett meanwhile only managed one of the five laps before the increasingly heavy going aggravated an existing injury and persuaded him to stop.  In the later race for over 50s Andy Denyer made his bow, but despite piloting a mountain bike perhaps more suited to the conditions a collision with one of the obstacles saw him sustain a nasty cut to his knee and brought about a premature end to his debut after only two circuits; he was classified 58th of 59 entrants.