While many of us were blinking into the light of the new year and struggling to recover from the night before, Lewes Wanderer Richard Burchett chose to spend the afternoon of Saturday 1st January 2022 at Gravesend Cyclopark.  On a dry, but raw day he finished 21st in Round 5 of the South East Road Racing League Winter Series. 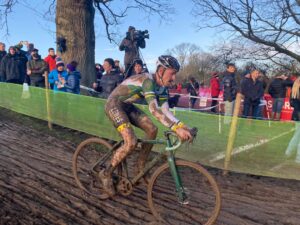 On the sunnier, but perhaps even chillier, afternoon of Sunday 9th January Patrick Hough was the lone Wanderer taking part in the National Cyclo Cross Championships at Ardingly Showground.  He lined up along with 72 others for the Elite men’s race for the right to wear the white jersey with red and blue bands of National Champion for the next 12 months.

The field may have enjoyed bright sunshine, but heavy rain for most of the day before left the largely grassy course devised by host club Crawley Wheelers only rideable by the strongest and most technically gifted of riders.  As if the conditions didn’t put enough strain on the athletes they also subjected their machinery to extreme rigours, as Patrick found to his cost as he had to re-engage his chain five times in the gloopy morass during the course of the race.

The race was due to last an hour but only the first four competitors completed five circuits within 60 minutes and just 31 remained on the lead lap.  Patrick wasn’t one of them, but he finished in a respectable 55th place from 70 to meet the chequered flag.