The first of the annual time-trials run by Lewes Wanderers finally took place on Monday 13th July.  Normally the Club would run a series of up to thirteen 10-mile events starting in early May, but due to the obvious constraints imposed by the Coronavirus racing activity has not been possible for nearly four months.

Lockdown may have been partially lifted permitting riders not from the same household to be in relatively close proximity to one another, but precautions still needed to be taken to hopefully ensure the safety of all involved.  Entry was online only rather than handing over cash upon signing in.  Thankfully it was a warm and dry evening as there would be no village hall available to act as headquarters.  The third major difference from the norm would be the absence of a “pusher-off” to hold the rider upright once clipped-in and provide a helpful shove on their way.

For the first of what will only be three “Evening 10s” for 2020 the competitors started from just south of Halland, head down The Broyle to the Kennel Corner mini-roundabout; turn left and race through Laughton until the A22 and then left again back to just before East Hoathly. 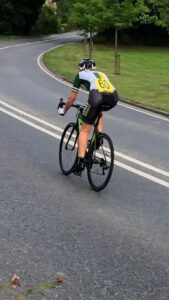 Impressively 36 competitors rolled up to get a measure of their form; 30 of them from the host club.  Even better to see was that the efforts of the Club’s newly appointed Women’s Representative - Gina Boakes - to encourage more females to race had manifestly proved successful as a quarter of the entry were female.

It was mightily close for the overall victory with guest rider Jesse Yates posting a scintillating new outright course record of 21:11, but that was just two seconds quicker than fellow-guest Matthew Chipping and the host club’s Brett Davis who tied for runners-up with Rob Rollings only 13 seconds back in fourth and former-Wanderer Pete Morris also dipping under 22 minutes a further 16 seconds back.