Lewes Wanderers series of 10 mile time-trials reached the two-thirds mark with Round 8 on Monday 25th June.  Visiting rider James Rix (Team Bottrill/Vanguard) blitzed the field of 31 finishers with his time of 19 minutes and 53 seconds, but home club rider Rob Rollings strengthened his bid for the overall title by finishing second in 21:32, with Matt Coombs coming third in 22:49.

16th placed Kate Mankelow (25:39) proved fastest of the half-dozen female entrants just beating 22nd Sue Collett (26:10), but the personal bests all came from within the twenty-five males to see the flag.  14th placed Phil Wright (25:10) was one of four gentlemen to beat their personal best, the others being Roger Hutchings (24th in 26:14) and the two riders to tie for 20th place in 26:07. Graham Faultless improved by 18 seconds, but Graham Knowles produced a storming ride to take a full two minutes off his previous mark.

The records tumbled in the third of Lewes Wanderers’ non-standard time-trials - the Circuit of Earwig - on the evening of Wednesday 27th June.  11th placed Lisa Davis reduced her own ladies course record by over a minute to 43 minutes and 52 seconds for the 17.4 mile course. Rob Rollings did likewise in reducing his own course record to 38:45 and to finish top of the 17 names on the leaderboard. 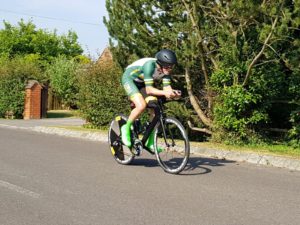 Will Herbert by Brett Davis

Lisa Davis shone brightest for Lewes in the Sussex Cyclists’ Association 50 mile time-trial early on Sunday 1st July.  Her time of 2 hours 10 minutes and 2 seconds was a course record for a female rider from an affiliated club and placed her second of the five female competitors and 28th overall.  Rob Rollings was 8th in 1:56:05, Will Herbert 17th in 2:02:14 and Rich Streeter 35th of the 45 finishers in 2:24:01.