Round 6 of the Lewes Wanderers proposed 13-event 10-mile time-trial series took place on the evening of Monday 7th June and it was the best supported so far with 23 athletes taking to the start line.

Joe wasn’t the only competitor to find improvement as 11th placed Neil Edwards took 5 seconds off his PB in lowering it to 25:50 and newcomer Andrew Razzell broke not just the 28-minute barrier for the first time, but also the 27-minute mark and now has a PB of 26:50.  The sole female competitor was Kate Thomas in 13th with 26:04.

The following night Paul Fletcher, racing for trainSharp was amongst 45 racers taking part in the latest of a3crg’s Glorious Goodwood TT-events around the historic race-track of the same name.  His time of 26 minutes and 38 seconds over the 11.8 miles was his quickest of the series, just 3 seconds better than his time from a fortnight earlier. 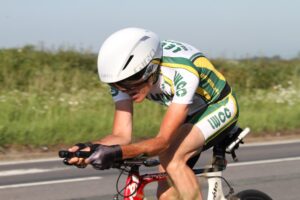 It was pretty warm even at 6:01am when the first rider was due off in the East Sussex Cycling Association 50-mile time-trial (incorporating the Veteran Time-Trials Association Surrey/Sussex Championship). One can only imagine how much of a sweat the 42 finishers would have worked up after around 2 hours of all-out effort.

Once again young Joe Benians shone as his time of 1 hour 53 minutes and 38 seconds in his maiden attempt at racing the distance gave him an excellent 6th overall and 3rd under-35 male.  Fastest female and 13th overall was Sally Turner (trainSharp) in a superb 1:57:19.

One place behind and agonisingly just 12 seconds outside of two hours was fellow trainSharp racer Paul Fletcher who was also 2nd among under 45 men.  Third fastest of the five female competitors and 2nd under-35 was Kate Parrish in 31st overall with a time of 2:12:58.  Peter Baker was 5th under-65 and 27th overall in 2:08:48.  Joe, Peter and Kate combined proved 5th fastest team of 3.