A quartet of Lewes Wanderers were lucky enough to gain much cherished places in the 2018 Tour of Cambridgeshire on the weekend of 2nd and 3rd June.  Despite the name this wasn’t a stage race, but a series of cycle events, some competitive, some merely recreational, based around the East of England Showground south west of Peterborough.

Back in Sussex that same morning Lewes rider Rob Rollings came an excellent 7th of 48 finishers in the Southern Counties Cycling Union 50 mile time-trial thanks to his superb time of 1 hour, 55 minutes and 3 seconds.

With most of the riders who had dominated the podium positions in the first four rounds of Lewes Wanderers 10 mile time-trial series not participating for various reasons there was a changing of the guard for Round 5 on the evening of Monday 4th June.  Stepping up to the top step was Rob Pelham who took a clear victory with his time of 22 minutes and 15 seconds. Runner-up was Peter Barling (23:48), just ahead of Dan Street (23:51), with Martin Baddeley also squeezing under 24 minutes with 23:54.

Fifth placed Paul Fletcher (24:09) reduced his personal best by a further 19 seconds and their were also new marks from 18th placed Graham Faultless (26:25) and 12th placed Kate Mankelow (25:26) who won her first ever round amongst the ladies ahead of Sue Collett (19th in 26:50).

The round also incorporated the club’s ‘tandem-10’ championship.  Peter Baker retained the title he has won every year since 2009 as he and this year’s partner Lisa Davis sped round in 22:27 to leave Peter Fox and Gina Boakes (25:44) in runner-up position for the second year running.

The warm and muggy evening of Thursday 7th June saw Round 1 of Lewes Wanderers annual series of highly popular criterium races.  There were five riders representing the host club in a full field of fifty and they had a modicum of success. Overall series champion in 2016 Rob Rollings was back and it was just like old times as he beat 2017 series winner John Cordner (Trainsharp) to the line at the first intermediate sprint up Shortgate Lane at the end of lap 2.

By general consent the pace of the racing was extremely high with four riders being tailed off on just the first lap and eleven non finishers by the end of the 5 lap 50 mile race.  Experienced circuit racer Alan Lester found himself detached from the bunch as the sprint wound up at the end of lap 3 and none of his four clubmates could infiltrate the points positions at the ensuing prime, but Rob Rollings returned to take 2nd place at the third and final prime sprint, sandwiched between ASL’s Steve Kane and Cameron Cragg.

On what cyclists would consider to be a flat and not particularly technical course breakaways are a rarity, but for whatever reasons on this particular night a group of seven somehow forged a gap over the chasing throng up Shortgate Lane, the one drag of any note on the circuit.  Their advantage was but a handful of seconds as they turned left to enjoy the tailwind down the Broyle to Ringmer, but at some point after that the metaphorical elastic snapped and the impetus amongst the peloton waned on the return leg along the Laughton Road and a selection of seven had been made who would ultimately contest the finish, unfortunately with none of the home riders amongst them. 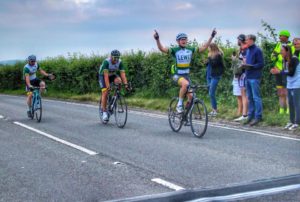 Steve Kane recovered from his previous efforts to beat team-mate and former Wanderer Cameron Cragg by a wheel (0.175 seconds) with James Bullen (URDT) a further half-second and a few bike-lengths behind in third.  All five Wanderers were classified with Nick Dwyer crossing the timing sensors back in the bunch some 25 seconds later in 23rd and Rob Rollings (30th) closely following Dan Street and Martin Baddeley home; Alan Lester was classified 38th and 1 lap down.  Going into Round 2 on Thursday 14th June Steve Kane leads proceedings with 66 points, with Rob Rollings in 7th place in the standings thanks to the 16 points he accrued in the sprints.

Aside from the quintet of riders a veritable army of club members were to be thanked for volunteering their services to administration, putting up signs, marshalling, driving, providing refreshments and everything else to make such an event run so smoothly.  Two who weren’t involved on the evening were Rob Pelham and Paul Hanratty who slipped off to West Sussex to compete in the Worthing Excelsior 10 up and down the A24. They made good use of the conditions as both posted seasons bests. Rob’s 21:07 placed him 3rd of the 27 athletes while Paul’s 26:10 left him 24th.

Southborough & District Wheelers brought their 25 mile time-trial south across the border on the morning of Sunday 10th June only to find the local Sussex riders too hot to handle.  Both the men’s and the ladies divisions were won by Lewes Wanderers as Rob Rollings lowered his personal best by 45 seconds to 53 minutes and 53 seconds and Lisa Davis proved quickest of the ladies with her time of 1:01:01.

Her husband Brett wsa a fine 8th in 56:17, while Michael Valks recorded 1:02:12 and John Makelow finished in exactly 1 hour and 8 minutes.  Matt Coombs should have joined them on the results board, but he had the misfortune to break a spoke and have to abandon his attempt.

That same morning over in Hampshire on the fast A3 course Nick Dwyer and Peter Baker took part in the Hampshire Road Club 25 mile time-trial.  Such was the quality of the assembled field that Nick’s impressive time of 51 minutes and 33 seconds was only good enough for 9th place while Peter also performed well, recording 56:55.