After two of the first four rounds were cancelled due to bad weather and the other two were run in changeable conditions Round 5 of Lewes Wanderers’ series of 10-mile time trials took place on the beautiful early summer evening of Monday 31st May.  There was even a rare tailwind to push the sixteen starters back down the A22 from the Boship Roundabout towards the East Hoathly finish line. 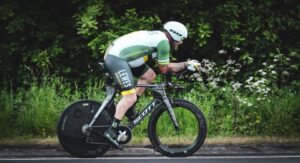 Winner for the second week in a row and with a third personal best for the distance in as many events was Joe Benians who improved by 25 seconds from his performance just two days earlier and beat the 21 minute barrier for the first time with a 20:57.

Earlier on that Bank Holiday Monday a quintet of Wanderers had taken part in a Brighton Mitre CC 10-miler near Steyning.  15th overall and fastest female was Sally Turner in 22:11; 6 seconds and a couple of places ahead of her trainSharp team-mate Paul Fletcher in 17th with 20:54.  They both gave best to Nick Dwyer in 7th place with a swift 20:54, while Darren Haynes (43rd in 24:18) and Sally’s other-half Allan Smith (65th, 27:20) formed part of the 71-strong field.

Paul too had been in action the Saturday before as he and Richard Burchett took part in the 2nd Round of the South East Road Race League series to be held at the Cyclopark on the outskirts of Gravesend.  A good turn-out of 47 racers in their category ensured hard racing and Richard narrowly (38th) beat Paul (42nd) to the finish line.

The action switched to the rather more confined banking of Preston Park Velodrome in Brighton for the rest of the week.  Peter Baker had his best night of the season on Wednesday 2nd for the latest round of the Sussex Cycle Racing League (SCRL) Track League.  Against eight other competitors in four events he placed 4th in the Points Race; 6th in “Win and Out”; 2nd in “devil-take-the-hindmost” and 3rd in the “Distance Race”.

He returned two nights later for the SCRL Friday Summer Circuits, but could only manage 13th out of 14 in the 40-minute race.  Also competing that night was Anya Tamplin (Hunt Bike Wheels) who took 5th from 12 in the women’s version of the same event.