The second of three evening 10-mile time-trials organised by Lewes Wanderers in an attempt to salvage something of the cycle-racing season took place on Monday 20th July, although roadworks prompted a late switch back to the traditional A22-based course.

The warm and dry weather tempted 44 competitors out to pit their fitness against the stopwatch of which 27 were from the host club.  The event also incorporated the club’s “road bike 10” with 16 racers opting to race without the benefit of time-trial bikes, “tri-bars”, deep-section wheels or time-trial helmets. 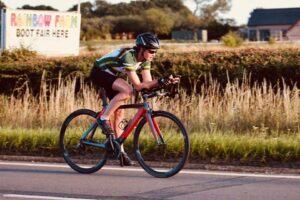 The previous day Brett, Lisa and Sally Turner had all ventured up to Cambridgeshire to take part in the Shaftesbury CC 50-mile event along the A11 near Newmarket.  Despite the miserable weather all three came away with personal bests for the distance.  Lisa posted a time of 1 hour 56 minutes and 52 seconds to place 58th overall and 5th of the 17 female competitors, just one place ahead of Sally in 1:57:38.  Brett’s new best of 1:48:25 gave him 29th out of the 62 racers to finish.