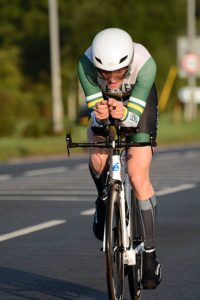 Having won his first ever round of Lewes Wanderers' 10 mile time-trial series during the summer Brett Davis bagged his maiden victory in one of the club's four non-standard tests against the clock on Sunday 24th September.

In near ideal mild, dry and sunny conditions Brett scorched round the 17.58 mile course in 43 minutes and 45 seconds to beat his club-mate Rob Rollings by a single scant second and his own personal best by nearly four minutes.  Former Wanderer Joscelin Lowden (Aprire Bicycles/HSS Hire) returned to take third place with 43:56 and break her own ladies course record set 12 months previously.

Sadly Sam Ramsey overcooked it at the hairpin bend at the southernmost point of the course and came down without breaking anything more than skin, but decided not to continue.