Those cyclists who like to ride fixed-wheel tend to also be those who will happily ride all day whatever the weather and that is just as well as Lewes Wanderers’ annual fixed-wheel 10 mile time-trial championship was incorporated into Round 6 of the evening 10s championship on Monday 5th June which was held in steady saturating rain and with a swirling wind that felt as if it was into your face whether riding out from the East Hoathly HQ to the Boship Roundabout or on the return leg.  As it was contenders for the crown comprised 40% of the field, although that was mainly due to a season low 10 athletes braving the conditions.  Winner of the “Single Cog” trophy for the first time was Peter Fox who posted a strong time of 25 minutes and 50 seconds, ahead of your correspondent (26:55), Darren Haynes, who punctured in the last 2 miles but still recorded 28:37 and Michael Turner (28:52).  Having finished all half-dozen rounds so far Sam Ramsey (23:44) and Aidan McConville (23:49) became the first to qualify for the overall series title based upon the best 6 rides, but they may soon be overtaken by the evening’s victor Tom Glandfield (22:22) and close runner-up Brett Davis (22:32).  In a strange way everyone was a winner on the night as Clare Parkholm (25:26) squeezed 4 seconds off her personal best and Rich Streeter (26:41) took a further 38 seconds off his ever improving mark.  Tom was back in action on the significantly drier, albeit still windy, evening of Wednesday 7th in an ‘a3crg’ promoted 10 in which he finished 13th of 94 thanks to his super-quick time of 20:49, even if that was a minute and 45 seconds behind the winner. 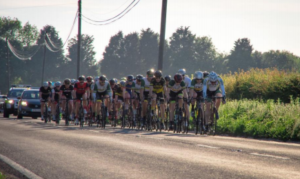 Round 2 of Lewes Wanderers three Criterium road race series took place the following evening with mixed fortunes for the 7 riders representing the host club.  At the end of the 2nd of 5 laps race organiser Darren Haynes successfully led out team-mate Cameron Cragg to triumph in the first of a trio of intermediate sprints.  No Lewes riders were able to bag a top three place the next time around, but in the temporary lull afterwards Dan Street fought his way into a five man breakaway.  With four strong teams represented and over 30 seconds lead by the time the quintet contested the final intermediate sprint it looked like there might be the rare possibility of the winner not being decided by a bunch sprint.  Sadly the long open straights of the Broyle and the Laughton Road kept the escapees in sight of the bunch and as the five started to tire from being exposed to a nagging breeze and then manoeuvre so as to not lead out the sprint the peloton closed rapidly.  As the sprint unwound Dan was swallowed up by the chasing pack, although his four erstwhile companions just managed to avoid capture by a group among whom Cameron Cragg claimed second and therefore 6th overall.  The final round on Thursday 15th carries double points and with the spoils so evenly shared in the first two rounds the series title is still well up for grabs.

The club record over the rarely raced distance of 15 miles had stood for 33 years until Brett Davis became the first Lewes Wanderer to best 36 minutes last year.  His place in the record books lasted a day short of 12 months when Nick Dwyer crossed the line in the Sussex Cyclists Association event on Saturday morning after 34 minutes and 14 seconds of effort.  The ink was barely dry on the ledger when barely 30 minutes later Tom Glandfield crossed the same finishing line with the timekeeper’s stopwatch registering 33:49 and thereby taking not just Nick’s fleeting appearance in the record books, but 8th place also. Third Wanderer to compete was Peter Barling whose time of 39:12 placed him 29th of 38 finishers.

Sunday morning was still mild, but began decidedly murky and with the odd spot of drizzle in the air as six Wanderers tried their luck and performed particularly well in the Southborough & District Wheelers 25 on their local A22 course.  Rob Rollings finished 6th in a time of 56 minutes and 28 seconds, but he was closely followed by 8th placed Callum Middleton (57:33) and one place back Brett Davis (57:37), who both set personal bests.  Brett’s wife Lisa (1:02:40) also improved on her previous best while claiming 3rd amongst the 16 female competitors. Sam Ramsey (21st) was 58 seconds outside the hour with John Mankelow (1:06:48) also staying the course on a day of a surprising number of non-starts and non-finishers.  Due to the difficulties in keeping track over such a long event official results of the Newbury CC 12-hour event the same day will be some time in coming, but unofficially Peter Baker covered a highly impressive 236 miles in the time allowed.