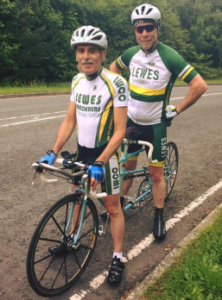 Monday 29th May saw Round 5 of Lewes Wanderers’ series of Evening 10 mile-trials and the worst conditions yet with the air-thick with moisture if not actually raining.  The round incorporated the club’s tandem championship which has been won by Peter Baker and a variety of partners every year since 2009.  This year Peter recruited Simon Yates as his stoker providing the power from the rear position and, for the first time since 2013, he actually faced opposition in the form of Peter Fox and Gina Wolf.  It was a pity there was no photographer at the finishing line as the two teams crossed the line almost as one in what must have been an impressive sight for the time-keepers, although of course, given the intervals the racers were set off at, that meant that meant that Peter and Simon (24:38) had prevailed by almost a minute.  Fastest overall, and the first man to win two rounds in this year’s competition, was Brett Davis (22:13) who also shaved a further 3 seconds off his PB in beating Tom Glandfield into second place by 5 seconds.  Brett’s wife Lisa had to settle for second place in the ladies ranks behind visiting Eastbourne Rover Ruth Summerford (5th and 22:54), but she too reduced her best by 22 seconds to 24:24.  There were two more personal bests among the 29 starters and 27 finishers, Gavin Richards and John Mankelow both punctured, as Dan Street (8th) quickly got to grips with his new bike to carve 33 seconds off his previous best of 23:58 and Rich Streeter (27:19) took 18 seconds off what he had achieved a fortnight before.

Having missed out the night before Peter Barling took part in the Brighton Excelsior event over the same distance on Tuesday night and posted a highly impressive 22:50, while on Thursday 1st June Michael Valks and Paul Hanratty rode in Eastbourne Rovers’ version of the event.  Michael was 16th in 24:33, Paul 30th in 28:43.

After many years sterling service in running Lewes Wanderers Evening Criterium races Chris Hough passed the baton to Darren Haynes, plus a willing team of helpers, for the 51st edition of the 50km circuit races on a warm and dry Thursday 1st June.  Darren had been hoping to be among the field of 50 racers, but a minor technicality lost amid everything else he had to organise meant his ambitions were thwarted at the eleventh hour and he will have to wait until Round 2 on Thursday 8th.  On the relatively flat and not particularly technically demanding Laughton based course successful breakaways are a rarity and so it proved on the night as it came down to a bunch sprint amongst those still with the large leading group.  Matt Twelvetrees representing The Cycle Room managing to get his front wheel across the line first with the organiser’s last minute replacement young Cameron Cragg bagging a fine 4th place.  Despite his stage victory Matt does not lead the overall standings after Round 1 as during the first, second and third laps there are intermediate sprints with points on offer and John Cordner (trainSharp Club) recorded two victories and a runners-up place to lead by 1 point.

Three Lewes Wanderers travelled up to the outskirts of Peterborough on Saturday 3rd June to enjoy the luxury of riding on closed roads, even if technically they were supposed to be among over 600 others hard racing in the Tour of Cambridgeshire 16.4 mile “Chrono” time-trial.  Fastest of the trio was Dom Lowden in 40 minutes and 2 seconds, ahead of Gavin Richards 42:26 and Vince Busk 44:50, who by finishing third among the 11 in the 65-69 age group thereby qualifies for the UCI Gran Fondo World Championships to be held in Albi in the south of France in August should he so wish.  The following day all three competed in a mass-start 79.3 mile race, again on closed roads.  Once more Dom completed the course the fastest and finished 29th of 456 competitors in his age group and thus qualified for the equivalent World championship race later in the year, while Gavin was 243rd of 840 riders in his category and Vince an excellent 27th of 61 in his.

Back in Sussex by the sea it was the annual Eastbourne Cycling Festival and a trio of Wanderers participated in the morning’s Criterium race on an L-shaped 1.2 mile circuit near the Western Lawns.  Sadly Cameron Cragg, Dan Street and Nick Smith were all either brought down or delayed by one of the three crashes and were unable to contest the finishing sprint.  Enjoying more success further inland were Tom Glandfield and Rob Rollings who finished 4th in 1:57:43 and 10th (2:00:17) respectively of the 58 finishers in the Sussex Counties Cycling Union 50 mile time-trial.