A quintet of Lewes Wanderers were in time-trial action on a cold and blowy Sunday 7th May.  Over in Hampshire on the A31 near Bentley Tom Glandfield overcame one of the arm-rests on his TT-rig disintegrating and, unlike a dozen others who abandoned for various reasons, persevered to the finish of the Charlotteville CC 50 to record a time of 1 hour, 52 minutes and 21 seconds and 28th place.  Back in Sussex father and son Paul and Michael Valks, plus club-mate Gina McGeever took part in the Norwood Paragon 25 near Horsham.  Michael posted 1:02:56 for 38th of the 66 finishers, while Gina’s 1:06:45 left her 4th of the 6 female entrants and Paul finished in 1:12:20.

The following evening conditions were considerably warmer and drier for Round 2 of Lewes Wanderers dozen 10 mile time-trials than they were for the season opener, but there was still a pesky breeze putting fast times at a premium.  Host club rider Brett Davis was just outside his personal best in 22 minutes and 53 seconds, but as the only rider to beat 23 minutes he claimed his maiden victory in this event.  Last week’s bronze medallist Aidan McConville again put in a consistently strong sub-24 ride (23:55), but this time had to settle for 7th as Sean Quinney (3rd in 23:12), Gavin Richards (5th, 23:33) and Dom Lowden (6th, 23:38) nipped in ahead of him.  Rob Pelham may also have challenged had he not suffered the same fate as club-mate Ton Glandfield the day before, his entirely broken arm-rest bringing his efforts to a premature end.  Among the 32 who did finish there were personal bests from Cameron Cragg (9th, 24:25), Vince Busk (16th, 25:30) and Sue Collett (30:44), although Sue’s time only gave her third among the ladies on this occasion behind the returning Lisa Davis (26:06) and Kate Mankelow (28:11).

After his triumph in one of the rounds in 2016 Darren Haynes once more tired his luck in Round One of the Prissick Evening Crits promoted by Cycling Development North East and run on a closed circuit in a suburb of Middlesbrough.  Unlike last year however Darren got boxed in on one of the final bends of the 45 minute race and crossed the line just outside the top ten. 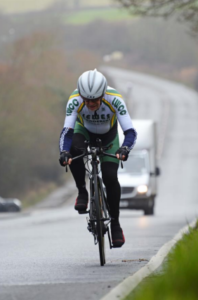 On the afternoon of Saturday 13th May Lewes rider John Mankelow headed north to Tenterden to compete in a 10 mile time-trial promoted by Southborough and District Wheelers.  In warm and sunny conditions he completed the lumpy anti-clockwise loop via Appledore and Woodchurch in 25 minutes and 53 seconds to finish 30th of the 45 competitors.  The following morning dawned wet for Worthing Excelsior Cycling Club’s 25 mile test such that 42 of the 116 entrants (including one Wanderer) thought better of getting themselves and their precious machinery dirty and the a further two riders failed to finish, one having unfortunately slid off at a roundabout on the greasy tarmac.  Three Lewes riders stayed the course; Cameron Cragg (1:00:43) came 35th, Tamar Vanderhaas (1:05:01) 58th and 4th of the eleven female finishers, and Rich Streeter (1:11:19) 70th.