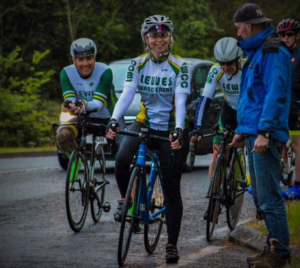 Round 1 of Lewes Wanderers series of a dozen Monday evening 10 mile time-trials was held on the opening day of May.  While the rain may have relented by the time the first of the 21 competitors was sent on their way up the A22 from near East Hoathly at 7 o’clock there was still heavy cloud cover, damp roads and a strong headwind to contend with up to the Boship Roundabout turn, when at least the third of those foes would grant some respite.  Fastest on the night was former Wanderer Pete Morris (ASL-360) in a strong time of 22 minutes and 10 seconds, just 14 seconds ahead of home club man Tom Glandfield.  Aidan McConville took a fine 3rd place in 23:52, just ahead of another impressive performance on a road bike, that of Martin Baddeley who finished just 1 second outside of 24 minutes.  Not content with merely organising the event Jon Collett then hopped onto his ‘TT-rig’ and promptly set a new personal best of 25 minutes and 55 seconds.  His wife Sue was the only lady brave enough to face the conditions and thus proved fastest female on her debut with a time of 31:12 and will surely beat 30 minutes sooner rather than later if she keeps at it.  The only other rider to manage an improvement on past results was youngster Cameron Cragg whose time of 24:27 was good enough for tied 8th position.

On the same day Lewes man Paul Valks was up in Hertfordshire competing in the Veteran Time Trials Association 10 where his time of 25 minutes and 35 seconds, which would have placed him 14th in his home club’s event, left him 73rd in that test such was the strength of competition.

John Mankelow was the club’s lone representative among 18 entrants for the first of five occasions this year that Eastbourne Rovers Cycling Club will make use of their 14.07mile circuit that takes in Pevensey, Hooe, Ninfield, Boreham Street and Wartling.  On another cloudy and blustery evening John finished 12th in 40 minutes and 8 seconds.