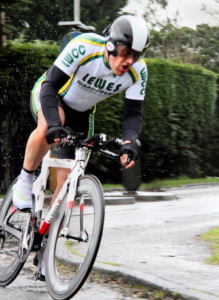 The morning of Sunday 5th March saw the first of Lewes Wanderers’ four non-standard distance time-trials of 2017 - the Circuit of Laughton.  Unfortunately for the competitors the 9am start coincided with heavy rain coupled with a gusting 20mph south-westerly wind blowing said precipitation straight into the riders’ faces down the 2 mile straight that is The Broyle, something they would have to endure twice.  Of course, having taken the first exit at the Kennel Corner mini-roundabout the survivors would then enjoy something of a tailwind back to Laughton, but by general consensus, they were the worst conditions the event has been run in during the 11 years since it began.  In the circumstances there was an impressive entry of 20 clubmen willing to submit themselves to such an ordeal for their own various reasons; almost as incredibly all of them lasted the 11.88 mile course without falling victim to any of the dreaded punctures that are all so common in such weather.  Winner in 2013 and 2015 Tom Glandfield perhaps took advantage of the absence of a few notable rivals to prevail again in 2017, albeit he was a clear winner as the only racer to dip under 30 minutes with a time of 29 minutes and 29 seconds.  Ride of the day came from the runner-up Darren Brockhurst, who was sidelined by injury for much of last year, but who is clearly a rider to be reckoned with for this as he set the sole personal best on the day with a highly impressive time of 30:22.  Strangely the top seven were very evenly spread with almost exactly a minute between each of the finishing times.  Gavin Richards took a strong 3rd at his first attempt with 31:21, ahead of Aidan McConville (32:22), Dan Street (33:23), fellow debutant Darren Haynes (34:17) and seasoned veteran Chris Martin (35:27).