The 31 competitors for Lewes Wanderers Circuit of Danehill time trial on Sunday 9th April were blessed with beautiful spring sunshine.  Indeed with temperatures as high as 10 degrees Celsius come the 8:30 roll out and with what wind there was behind them as they tackled the third leg of the roughly triangular course from Maresfield, through Nutley and across the Ashdown Forest to Wych Cross it was somewhat of a surprise that more records weren’t broken.  Of course not everything was in the riders’ favour as they would start by riding into the breeze down the A275 from Chelwood Gate, through Danehill and Sheffield Green, and up to North Chailey.  From there the terrain would still be rolling rather than flat as they would join the A272 eastbound through Newick and Piltdown.

Lisa Davis continued to exhibit stellar early season form as her time of 50 minutes and 44 seconds not only proved fastest of the four female entrants (all Wanderers) but took nearly five minutes off her personal best set only last year, and almost a minute off the ladies course record.  Her husband Brett also shone as his time of 45:03 took two-and-a half minutes off his mark of 2016, although it wasn’t quite quick enough for overall victory, nor that of fastest rider from the host club.  Those accolades went respectively to Eastbourne Rover George Welfare (43:03) and to Lewes Wanderer Callum Middleton, whose 43:19 carved a similar sized chunk off his ‘PB’ as that achieved by Mr Davis. 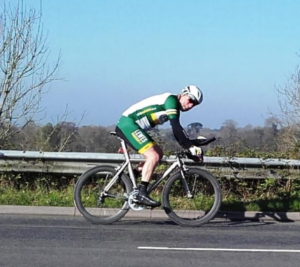 Fourth place, and on a road bike rather than a time-trial specific machine, went to the home club’s Aidan McConville (45:41), eight seconds ahead of club-mate Sean Quinney, both men also set new personal bests.  Mr and Mrs Davis weren’t the only married couple to toast success on the day as Nick (50:56) and Kerrie Smart-Jones (1:09:12) both improved on their marks set 12 months earlier.  Less than a week before his 65th birthday Simon Yates didn’t trouble the record keepers, but he did maintain his proud record of having completed the course every year since 2009.

Such if the scarcity of tricycle specific events that Lewes Wanderers’ Adrian Hills was forced to journey as far as Norfolk in order to race in the Diss & District CC run 25 mile event that same day.  One of the advantages of time-trialling in this part of the country is the relatively flat terrain; the main disadvantage being the strong winds sweeping in from the sea.  For this particular test that entailed the seven competitors faced forging the return 12.5 mile leg of the A1066 dual-carriageway into a stiff breeze.  Adrian’s time of 1:35:01 earned him 6th place on the day.