The third and final round of Lewes Wanderers’ heavily truncated series of 10-mile time-trials took place on the evening of Monday 27th July.  Unexpected roadworks popping up on the A22 within an hour of the proposed start forced a swift change back to the Broyle and Laughton based course used for Round 1, but race-promoter Joe Benians and his crew of volunteers worked wonders to get them themselves in position to allow racing without delay for the 33 anxious entrants.

On what was a damp and blowy evening there were just two personal bests, but both from the same family.  Teresa Tamplin shaved 12 seconds off her mark set just a fortnight before to reduce it to 29 minutes and 21 seconds to finish 31st overall and 5th of the six female competitors.  Her daughter Anya meanwhile would have matched 3rd fastest female Kate Parrish (19th in 25:41) had she repeated her time of two weeks before, but instead reduced her best by a full 71 seconds to 24:30 and was only 7 seconds behind Lisa Davis who was a place ahead of her overall in 14th.

Behind the visiting Howard Shaw and former-Wanderer Pete Morris Lisa’s husband Brett made it 2-1 in his personal battle with Rob Rollings as he snagged 3rd place in 21:43, just 6 seconds ahead of the man who had beaten him by 5 seconds seven days before. 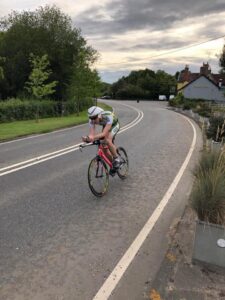 Just over a minute covered the next half-dozen finishers from the host Club was Richard Burchett in 6th with 23:08, just 14 seconds ahead of Paul Fletcher, with Dan Street a further 17 seconds back.  Ed Tuckley (24:12) just missed out on the top ten, but did beat 12th placed Aidan McConville by 8 seconds and Club Chairman Dom Lowden by 10.

The previous Sunday a3crg had hosted a time-trial around 5 laps of the Goodwood Motor Circuit in West Sussex.  Representing trainSharp although members of Lewes Wanderers Lisa Davis finished 9th out of 19th female entrants in a time of 27 minutes and 52 seconds for the 11.8 mile event.  Husband Brett Davis was a strong 12th out of 67 overall thanks to his effort of 24:41.

In the Sussex Cyclists’ Association 30-mile event near Steyning that same morning Peter Baker was 24th out of the 31 finishers with his time of 1:16:48.