Monday 14th May saw Round 2 of Lewes Wanderers' series of 10 mile time-trials.  Conditions weren't quite as favourable as for Round 1 the previous Monday as cloud cover had caused a drop in the temperature of a few degrees and there was a stiff northerly breeze confronting the riders as they returned to East Hoathly from the Boship Roundabout to cross the finish line.  The weather may have changed, but the pecking order amongst the fast boys was entirely unchanged from the week before. Former-Wanderer Pete Morris (ASL) triumphed in a time of 21 minutes and 45 seconds, half-a-minute ahead of the home club's Rob Rollings, with Brett Davis falling 2 seconds outside of 22 minutes, but clearly beating Rob Pelham (22:51) to third spot on the podium. 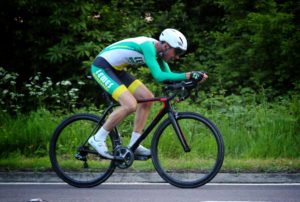 The situation was similar amongst the three females to compete with 11th placed Lisa Davis (24:48) winning for the second week ahead of Kate Mankelow (26:14 and 20th) and Sue Collett (27:17, 23rd).  While three riders made their debut over the distance and set a benchmark for future progress there was but one personal best by newcomer Richard Burchett in 14th position thanks to his time of 25 minutes and 10 seconds, 12 quicker than his best set just last month.  Once again there was the largest permissible field of 30 riders to set off, but only 29 returned riding their bikes as John Mankelow hit a large pothole near Golden Cross with an immediate puncture signalling a rapid end to his efforts for the evening.

Brighton Excelsior Cycling Club’s 10 mile time-trial on the warm, but windy evening of Tuesday 15th May was run as a ‘2-up’, that is with riders racing in pairs, sharing the workload of punching a hole through the air by riding in front as and when they see fit and sharing a finishing time.  In the absence of any clubmates at the event Lewes Wander Mark Frost teamed up with Rupert Robinson of Crawley Wheelers and the combination clearly worked as they rode off with the victory in a time of 21 minutes and 12 seconds that none of the other nine competing couples could better.

After a week of almost unbroken sunshine Sunday 20th May dawned disappointing damp and misty for Lewes Wanderers’ 30 mile time-trial incorporating the Veteran Time-Trial Association 30 mile Championship.  Precisely one third of the startsheet of 45 riders was comprised of those from the host club, however only thirteen crossed the finish line as there was one non-starter and Gavin Richards took the wrong exit from one of the multiple roundabouts along the course and abandoned his attempt.

Despite the cool conditions Lisa Davis scorched round the A22 based course in 1 hour 15 minutes and 10 seconds to set a new club ladies course record by 79 seconds and personal best by almost two minutes to retain her club title and take 7th place of the thirteen riders from the host club.  Along with 10th placed Gina McGeever (1:21:59) and 11th Clare Parkholm (1:22:37) they beat the club’s record for a team of three females over the distance by a monumental 12 minutes; a feat Lisa and Clare in conjunction with Kate Mankelow also achieved, albeit by a smaller margin, over 25 miles at the East Sussex Cycling Association 25 just four weeks ago.

In the gents competition the first two were unchanged from 12 months previously with Nick Dwyer (1:06:49) again edging out Brett Davis (1:08:29), but like his wife he too slashed nearly two minutes off his previous best over the distance.  Behind them Mark Frost took a strong third in 1:09:57 ahead of Aidan McConville (1:13:07) and Martin Baddeley (1:13;53) both on road bikes with tri-bars.

Come the afternoon the sun had most definitely burnt off the cloud and the temperature had risen significantly just west of Winchester where Lewes Wanderers Dan Street and Paget Cohen were competing in something called the Battle in the Bowl.  This was an endurance off-road cyclocross race of two hours duration around a natural amphitheatre just off the A272 at it’s western end.

Dan made the better start only to puncture shortly after the start of the second lap as the field wended its way up a long steady gravel incline from the grassy base of the bowl up the inner rim and he resumed at the very back of the 130 riders.  Paget made use of his climbing ability on the 7% track up to the rim of the bowl to make some ground through the field, but he was retaken by his clubmate on the steep and sketchy descent back into the bowl at the end of lap four.

Sadly both were to puncture once more at about the same time and with his spare inner tube already put to use Dan’s race ended on lap 7 when he was running in the top 60 or so.  Paget made use of his spare tube to rejoin the fray for two more laps and finished 28th of the 38 male competitors in their 40s and 87th overall three laps down on the winner.