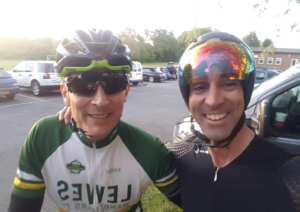 Round 2 of Lewes Wanderers summer series of 10-mile time-trials took place on the evening of Monday 13th May.  Guest rider Pete Morris (Team ASL) was the fastest on the night in 22 minutes and 56 seconds, but behind him the competition was friendly, but fierce between the 20 entrants from the host club.

Martin Baddeley had to equal his personal best of 23:19 in order to edge our Richard Burchett (23:25), while Paul Fletcher and Dan Street tied for 4th place in 23:47, just nine seconds ahead of Ed Tuckley who ducked under 24 minutes for the first time.

15th placed Kate Parrish also matched her previous best set just a week before, but her time of 26:40 this time wasn’t quite enough to beat Kate Thomas (26:30), while 9th placed Anna Dwyer (24:51) repeated her victory from Round 1.

Two nights later Anna’s father Nick travelled into Hampshire to take part in an a3crg 10-mile time-trial and it was certainly worth the trip as he recorded a blistering time of 19:55, although such was the quality of the competition that he was only 6th out of 55 competitors.

Paul Hanratty was just one Lewes rider among 27 others at Round 5 of Eastbourne Rovers’ series of summer time-trials.  His time of 28 minutes and 43 seconds leaving him in 26th overall.

There was also closed-circuit action that night for a brace of Wanderers as Dan Street and Darren Haynes took part in Round 4 of the Gravesend Cyclopark Summer Series.  Dan crossed the line in 22nd place at the end of the one hour race with Darren half-a-dozen places behind.

Nick Dwyer’s sparkling form continued into the weekend when he and fellow Wanderer Brett Davis were in south Wales competing in the Virtual CC 25 mile time-trial near Neath.  They both took advantage of what is renowned as a super fast course with personal bests. Brett reduced his by 1 minute and 26 seconds to just eight seconds outside of 51 minutes.  Nick only shaved six seconds off his best, but it was enough to break the 49 minute barrier and reduce his own club record to an incredible 48:59 at an average of 31.6mph.

Dan Street was back cirucit racing that afternoon, but this time on the open roads south of Chailey in a League of Veteran Racing Cyclists event.  After six laps of the 6.56 mile course Dan finished a creditable 13th overall and 5th in his age category in the bunch sprint.