The first of Lewes Wanderers summer series of a dozen 10-mile time-trials took place on the evening of Monday 6th May.  Twenty-two athletes presented themselves to be tested on the A22 course from East Hoathly to the Boship Roundabout and back.

11th placed Anna Dwyer was the fastest of the three female entrants and she lowered her personal best for the second time in three days from 25 minutes dead to 24:43.  Second fastest female was Kate Parrish in 27:40. 13th placed John Bryant produced the other personal best on the night as he reduced his mark by an impressive 45 seconds to 25:16. 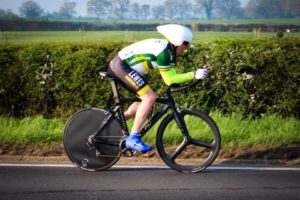 Just as Lewes welcomed guest riders to their event then so did Brighton Excelsior CC to their similar event the following evening when Lewes rider Mark Frost almost upset the hosts when finishing second out of thirteen in a superb time of 22 minutes and 13 seconds.

On 11th May Nick Dwyer and Rich Streeter took part in the Hampshire Road Club 10 mile time-trial near Liphook.  It was well worth the long journey and sacrificing their Saturday evening as Nick recorded a scorching 20:08 to claim 7th of the 108 finishers while Rich smashed his personal best by 49 seconds and the 25-minute barrier for the first time as he stopped the watch at 24:38 and took 91st place in the process.

The following morning Richard Burchett was the lone Lewes rider competing in the Worthing Excelsior 25-mile time-trial.  This time an early start was rewarded with him beating his recently set personal best by 19 seconds and the magical hour mark for the first time and by a full 13 seconds as he also bagged 9th place overall.

The racing action switched from the tarmac to off-road later that day as four Lewes Wanderers were at the Matterley Bowl just east of Winchester to compete in the Battle in the Bowl races.  In the morning’s 6-lap “Open Warfare” event for bikes of the riders choosing Rob Pelham reeled off a succession of sub 14 minute laps to finish on the same circuit as the leader in 10th out of 80 overall and 6th out of the 35 men in their forties competing.  One of whom was his club-mate Jon Collett who coped less well with the gravel-climbs and twisty grass infield as he finished a lap down in 63rd overall and 31st Vet 40 male.

In the afternoon’s two hour “Elite Cx” event for cyclo-cross bikes only Darren Haynes initially sprinted away from his club-mate Paget Cohen and established a one minute and twelve second advantage at the end of the first lap.  As fatigue set in most riders slowed, but Paget less so than Darren such that on lap six, shortly after having been lapped by the leaders, he overtook his club-mate on the steep climb out of the bowl and was almost a minute ahead by the end of that tour.  Darren was eventually lapped for a second time and classified 77th out of 121 finishers overall; 28th of the 40 men in their forties.  Paget completed nine of the victor’s ten laps to see the chequered flag in 60th overall and 24th in the Vet 40 male category.