Dominic Lowden was the lone Lewes Wanderer pitting himself against 22 other riders from the host club among others in the Brighton Excelsior evening 10 mile time-trial on Tuesday 18th April.  He acquitted himself well against the odds however by coming away with a fine 4th place in a fast time of 22 minutes and 21 seconds.

It seems some cyclists will go to any lengths to race their bikes as one Lewes Wanderer flew all the way to the other side of the world to do just that.  Auckland, New Zealand was the host city for the 2017 World Masters Games in which Bob Evans competed in three events against fellow athletes aged 70 to 75 from the Antipodes, North America, Japan and Europe and he did himself, his club and country proud.  On Saturday 22nd April he came 4th from a field of 39 riders in a 10 lap city centre race, the following day 6th out of 20 in a time-trial thanks to his time of 31 minutes and 38 seconds.  The road race of Sunday 29th was what he had travelled all that way for though and, despite wet and windy conditions, Bob got away from a peloton of 80 riders into a three man breakaway.  The trio gained almost a minute on the bunch, but in the end the lone Brit was outmanoeuvred by a duo from the host nation and he had to settle for a bronze medal.

Somewhat closer to home Bob’s club-mate Adrian Hills was in action on both of the same two Saturdays.  On the 22nd his time of 36 minutes and 37 seconds placed him 51st in the Kingston Wheelers 10 up and down the A24 in Surrey.  One week later Adrian recorded a time of 1 hour, 33 minutes and 52 seconds in finishing 12th in the TA (East) Tricycles Lincoln 25. 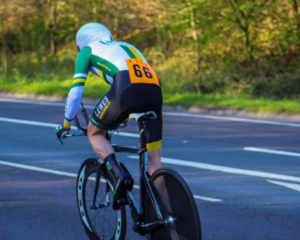 Back in leafy Sussex the weekend of the 22nd and 23rd of April saw the East Sussex Cycling Association spring 10 and 25 mile time-trials incorporating Lewes Wanderers own 25 mile championship.  The shorter distance event took place on a bright and dry Saturday morning and featured 10 Wanderers in the field of 53 starters.  The best result came from Sean Quinney who reduced his personal best to 22 minutes and 40 seconds in claiming 11th place.  Clustered behind him in the results Stephen Comben (20th in 23:27) was fastest in the 35-39 age group while Sam Ramsey (22nd, 23:47) did likewise among those aged 50-54.

An impressive 17 Wanderers took to the start line the following morning for the longer event and the chance to claim an early season trophy.  Tom Glandfield regained the title he first won in 2015 in finishing 6th of the 69 starters in a time of 55 minutes and 20 seconds.  Club runner-up and 11th overall was the returning Rob Rollings (56:58) while Rob Pelham (57:47) could console himself with winning in the 40-44 age group and forming the third part of the 2nd fastest team on the day.