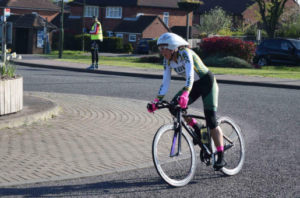 The Easter weekend of time-trialling kicked off with Crawley Wheelers CC’s Sporting event on a bright, but blowy Good Friday.  This 41.6 mile test is something of an oddity in that most races against the watch of more than 25 miles are held on flat courses so as not to add to the competitors suffering, with most ‘sporting’ TTs, that is to say those not designed with outright speed in mind, being less than 20 miles for the same reason.  Beginning south of the host club’s home town in Handcross the racers set off down the A281 to Cowfold, turn west along the A272, take the first exit at the next roundabout to turn south through Partridge Green to Steyning.  From the southernmost point of the circuit they head north via Small Dole, then a loop to the east of Henfield, so as to avoid the High Street, before the mainly uphill drag to the finish back through Cowfold again.  Three Lewes Wanderers took part with Tom Glandfield the quickest; his time of 1 hour, 40 minutes and 26 seconds placing him 7th of the 65 finishers.  Tony Sinnett’s 2:02:47 left him on 56th place, while Gina McGeever went two positions better and grabbed third fastest female on the day, although her time was an agonising 27 seconds outside of two hours.

Later the same day in wet and windy Derbyshire Callum Middleton was among 44 finishers in Round Two of the Knight Composites Classic Series promoted by Buxton CC and Sett Valley Cycles.  Held over three 11 mile laps of rolling and exposed countryside this was a tough test and the Lewes rider’s time of 1:37:32 was only god enough for 15th place, but was a fine effort nonetheless.